Perch fishing is a fantastic pastime that embodies everything that’s great about the wider sport, as it offers the opportunity to get up close and personal with one of the UK’s most impressive fish.

The perch is a beautiful ambush predator with a huge mouth and a voracious appetite and landing a larger specimen is as rewarding as any of those you’ll find in Britain’s waterways.

If you’re new to perch fishing or you’ve tried it and haven’t had much luck, you’ll be looking for a few perch fishing tips and tricks to improve your success rate. The good news is that there are plenty of things you can do to tip the balance in your favour and get those wonderful fish taking the bait.

As we’re a helpful bunch, we thought that we’d put together these handy perch fishing tips and tricks to get things moving for you. Here we’ll take a look at the best ways to find perch, how to attract them and how to get them taking your bait.

So let’s dig in and see what’s what. By reading on, you’ll find out there’s much more to it than putting a worm on a hook and hoping for the best. 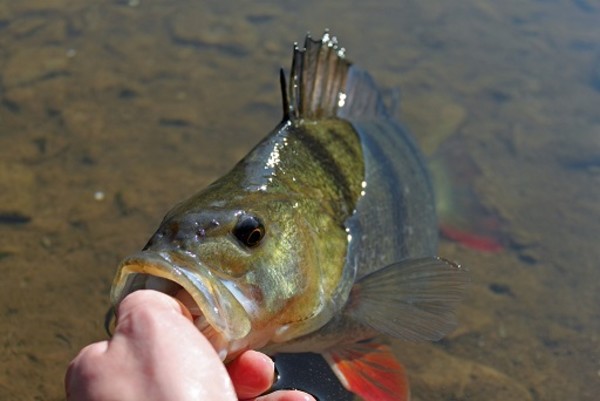 Your average perch is around 2-2.5lbs in weight and is identifiable by several thick stripes along its body and its spiny dorsal fin. It’s a fish that has a particularly largemouth and it’s a predator that ambushes its prey from whatever cover it can find.

Perch can be found in pretty much every stretch of water in the United Kingdom, regardless of whether it’s a lake, canal, natural waterway or a commercial fishery.

However, perch fishing is most often practised along with commercial carp fisheries across the country, as perch can be found therein great abundance. This is thanks largely to the fact that perch have a particular liking for small baitfish, which is also present in great quantities in these waters.

As we’ve already mentioned, perch prefer to strike at their prey from a hidden position - the reason for their classification as an ambush predator - which is why experienced perch fishing anglers target areas like rushes, islands or under the canopy of overhanging trees.

To really get inside the mind of the perch, you need to think like one and this will help you predict where they might be lurking.

Man-made canals and commercial fisheries can sometimes offer something of a featureless landscape, but there are still areas that a perch might be hiding. Try looking towards the deeper areas of the river or lake, which are often frequented by baitfish shoaling together - something that will attract the attention of the perch.

If it’s difficult to determine the exact location of the deepest areas, you should aim for around 5 metres or 2-rod lengths away from the bank, as long there is a natural drop off for baitfish to hide in. 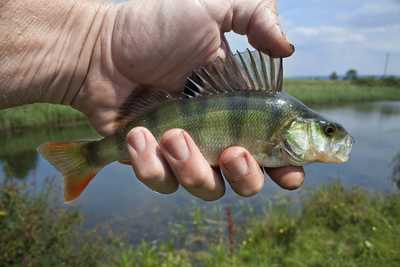 Perch are active all year round, even during the winter, but if you are looking to land a specimen at the larger end of the spectrum, then you want to be doing your perch fishing during spawning season.

This happens every year between March and April, as they get hungrier due to their instinctive desire to put on weight for in preparation for breeding. During this period, the perch will be feeding at some point every day, irrespective of the weather conditions.

It’s fairly common knowledge that perch fishing is best done when the light is poor, as it’s the ideal time for perch to hunt - particularly on days with lots of sunshine.

It’s much easier in low light for this predator to stalk its prey, making it a profitable time for anglers who fish during these times. It will mean getting up earlier than most or staying long after many have gone home, but this peak perch fishing period often rewards those with patience, so take advantage of it.

The difference in results can be quite marked, so it can be well worth the wait.

A good tactic you can start with is to try to appeal to the voracious appetite of the perch by giving exactly what it loves - smaller fish! By throwing a handful of small bait, such as maggots over the area you’re fishing in, you’ll attract baitfish that will also subsequently draw in the perch.

Then it’s just a matter of getting the perch’s attention, which can be done with an easy, but effective technique.

In order to avoid getting bites from smaller fish, you should use a larger size 12 hook and bait it with a king prawn, which is only really going to appeal to the perch with its relative oversized mouth.

If you want to make it even more vivid and striking, you can do so by immersing it in bright red bait dye for a short while. Use this kind of bait when you next go perch fishing and it’s not going to be long until a peckish perch comes along. Watch out though, as carp are quite fond of them too!

Perch fishing with worms can also be extremely effective, as it’s another bait that the perch love.

They’re likely to go for a nice juicy lobworm, irrespective of how hungry they are, particularly one with a soft tail end. Most fish are most often cagey and cautious, but that often goes out of the window when a delicacy like that is on offer. You could also try hair rigging with worms, but it can be a bit fiddly, so practice before the session.

When you’re thinking about which ledgers, floats or perch fishing lures to use, it’s best not to overthink things, as a standard waggler will usually suffice.

Perch numbers have increased in recent years, driven in part by the recent popularity in the UK of drop-shotting which offers a great fishing experience with just a short rod, small reel, lure and worm.

Any floats you do use need to be on the delicate side, due to the fact that you want one that takes minimal effort by the perch in question to give you a positive bite indication.

Other methods of providing yourself with an early warning system include drop indicators and bite alarms - however, the much cheaper float option normally does the job. We’d recommend something like an 0.5g float for this job.

You’ll want to travel light too, as you’re unlikely to land a specimen larger than around 3 lbs when you go perch fishing. All told, you’re only going to need a short casting rod, such as an Avon rod, a small reel, a lure and some bait and you’re good to go.

Perch fishing is great fun, as there’s a pretty abundant supply of them in UK waters and because of the fact they’re often up for a free meal. This means that you’re not often going to come away empty-handed if you follow the perch fishing tips and tricks we have given you today.

You just need to know where to look, when to look there and what perch love to eat.

We thank you for reading our article. We hope that it proves useful to you and gets you landing beautiful perch and falling in love with the sport like so many have before.